Capoeira is not just a dance, but a real art. And everyone can master it, if, of course, they try and make efforts.

Capoeira is the national martial art of Brazil, which combines elements of play, wrestling, dance and even acrobatics. All movements are performed to rhythmic Brazilian music, and the result is an amazing energetic mix! 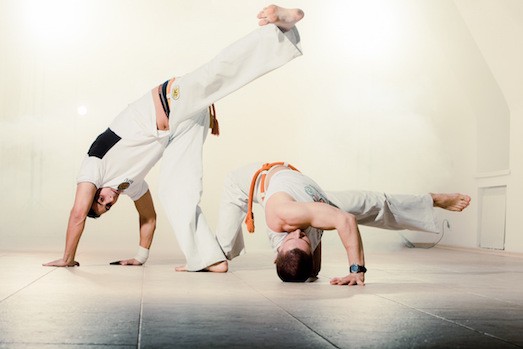 It is worth noting that although elements of combat are present, contacts between partners are reduced to naught, since low positions prevail, imitated kicks, acrobatic techniques, as well as all kinds of sweeps. But when one dancer allegedly attacks, the other dodges in every possible way, and the result is an amazingly beautiful duel. But in order to achieve this, all techniques must be well-coordinated and coordinated.

How did it appear?

The history of the emergence and development of capoeira goes back to the 18th century, but it is believed that it arose much earlier. If you believe the most widespread and generally accepted version, then this art originated in South America, and thanks to black slaves who were brought from the colonies of Guinea, Congo, Mozambique and Angola by the Portuguese.

At the time, they were treated extremely cruelly and forced to flee. The runaways organized entire free cities (kilombush), in which the often vibrant and distinctive African culture clashed with the more measured Indian. And for fun and to keep fit, they danced. This is how capoeira appeared. 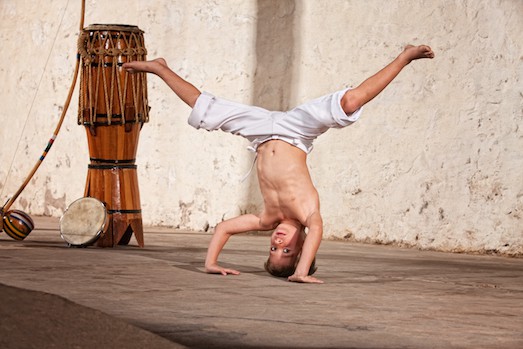 There is various information about the origin of the first dances. So, some believe that they belong to the subculture of national African dances. Initially, there were no martial techniques in capoeira. Others believe that the national martial dance of Africa “ngolo”, which was an integral part of the initiation rite in the southern regions of Angola, became the basis of the art.

Young warriors, who entered into battle with each other, represented zebras. One way or another, the origins of capoeira have always been associated with the name of the legendary hero Zumbi, who became a symbol of resistance for the Brazilian people.

As for the name, there are also several versions. According to one of them, from the Indian language tupi it is translated as “a field overgrown with bushes and cleared by felling or burning.” Probably, the interpretation is relevant, because grounds were needed for dancing, and they probably had to be cleared.

According to another version, in Portuguese, “capoeira” is a “cage for chickens.” But there is a third version, and its adherents believe that the name is a distorted pronunciation of the words “kipula” and “kipura”, which can be translated from the Kikongo language as “fight” and “flutter from place to place.”

By the way, there was a time when capoeira was prohibited by law, and therefore for some time it went underground.

After the military coup that took place in Brazil in 1930 and completely changed the political situation, capoeira was recognized by law and began to develop more actively. And therefore, several branches appeared, each of which can be considered an independent direction.

So, the main known styles of capoeira:

It is worth noting that it is very, very difficult to distinguish between styles, and even for an experienced master, because some movements and elements are inherent in all directions, while others are constantly being improved. 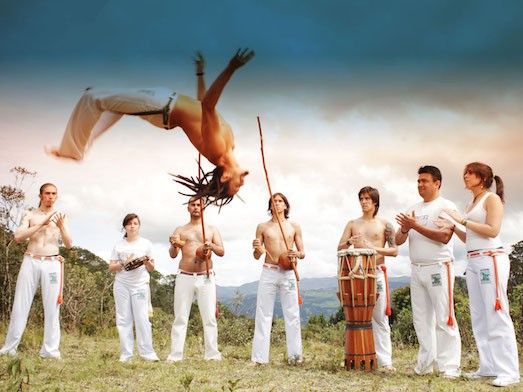 Why is training useful? Capoeira has many undeniable benefits:

There are very few downsides. These include a small number of vocational schools, as well as the danger of some movements.

How is the training going?

It should be noted right away that all lessons are very energetic, at a fairly fast pace. The movements are performed to the national Brazilian music, sometimes musicians are invited to play national musical instruments (although it is quite possible to pick up rhythmic modern compositions).

The training includes many wrestling techniques, dance steps and even acrobatic tricks (they can only be performed by experienced capoeiristas). The game, which is played remotely and excludes any direct and close contacts of the dancers, includes a whole arsenal of movements, such as various supports, sweeps, throws, jumps, and defensive elements. 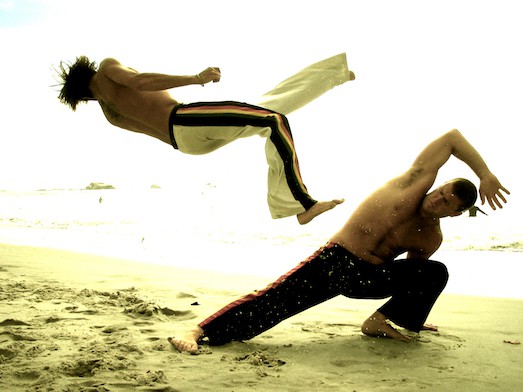 When one partner attacks, the other defends. As a result, the dance should look harmonious and at the same time dynamic, so that all the elements are performed rather quickly.

First, the coach helps to master the basic elements, they are the base of capoeira. Then they are connected into whole bundles and chains. Then the game with a partner is worked out, interaction with him in dynamics.

What do you need to start classes?

To start fully engaged, you must first find a suitable school and enroll in it. Unfortunately, there are not so many professional and experienced trainers, and often capoeira is taught in fitness centers and is presented as a direction of fitness.

It will take a little for training. First, it’s your attitude. Be ready to give your best and work hard. Secondly, it is clothing. It is not necessary to acquire a special form, any free things will do. And you can give up shoes altogether, without them it is much more convenient to do it.

Get started training and master this art!