Fitball is a kind of gymnastic ball, with the help of which the process of losing weight and maintaining muscle tone is more varied and faster. Fitball exercises for weight loss are very effective and safer compared to other types of physical activity. 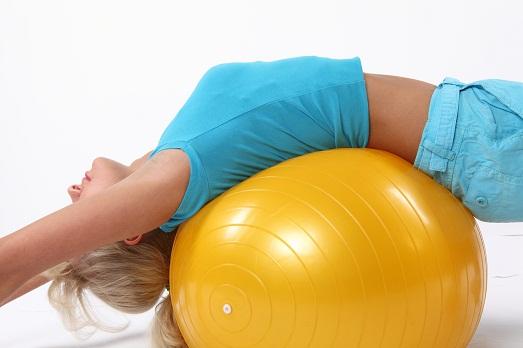 Even pregnant women, people with diseases of the spine, as well as elderly people can work with fitballs. In addition to all this, training on fitball will be just a salvation for people with varicose veins, because the load on the legs is minimal or absent.

Such a ball is unique in that when working with it, you always have to remember about balance, thereby developing the vestibular apparatus and training all muscle groups that are not even involved in regular training.

Some girls have a fear that the fitball can burst if you push hard on it. This is not true at all! Such gymnastic balls are equipped with a special anti-bursting system, thanks to which, if there is a puncture in the ball, then the air will simply go down a little, and not explode like a grenade.

How to choose the right fitball?

Fitballs come in various sizes, ranging from 45cm to 95cm. The easiest way to determine if a fitball is right for you is to sit on it. If your knees are bent at a 90 ° angle, then this is your size. Usually, girls with a height of up to 165 cm choose balls with a diameter of 55 cm, and when the height is in the range from 166 cm to 185 cm, then the diameter of the ball will be 65 cm.

Due to its shape, a fitball is never stable, so the entire exercise cycle performed on it will be accompanied by constant tension of all muscles of the body. Such loads help to burn fat deposits, sleeping peacefully on your barrels and other parts of the body, as quickly as possible. 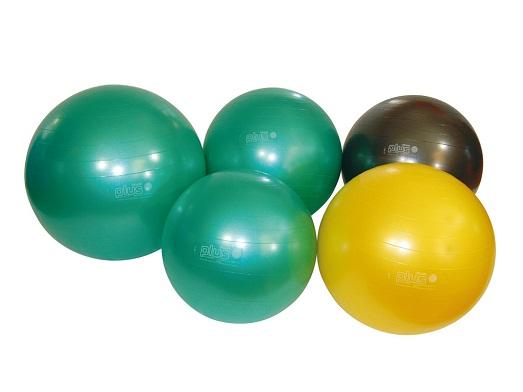 In addition to constant balance, there is a group of special exercises that will also work on certain muscle groups that you most want to tighten. Fitball is especially effective for the upper and lower thighs, abdominal muscles, helps to strengthen skeletal muscles, contributing to correct posture. If you purposefully train the problem areas of the buttocks, then soon you can get rid of cellulite. 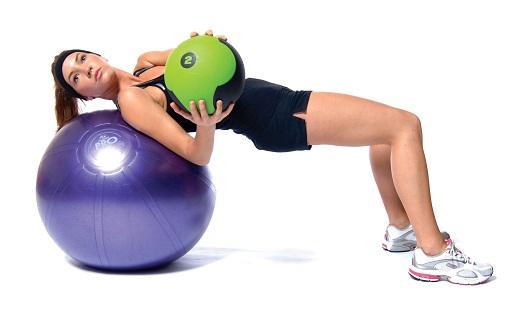 But do not think that if you purchased such a ball in a store, then a slender and fit figure is provided for you. In addition to physical activity, it is necessary to follow all dietary rules and drink water. Only by following all these rules, you can achieve not small results.

Exercises for the muscles of the thighs and abs

Exercise 1. We lie on our backs, stretch our legs. We fix the fitball with two feet, then raise our legs up, then lower them down, without losing the ball. For the more prepared – keep the legs straight, for the less – at an angle of 45 °.

Exercise 2. For him it is necessary: ​​lying on your back, hold the fitball between the inner surfaces of the thighs. Squeeze with maximum force and unclench the muscles of the hips.

Exercise 3. Starting position: stand up and straighten your back, squeeze the fitball between the inner surface of the thigh. We squeeze the ball and keep our legs in this state for 1 minute. After that, without changing position, we perform 30 jumps. We carry out 2-3 approaches.

Exercise 4. This exercise is very effective for weight loss on fitball. We take the correct position: standing on the right leg, put the second on the fitball to the left. Take a stable posture, your body should resemble the letter “T”. We stretch our arms in front of us and begin to squat. It is necessary not to fall, constantly maintain balance, straining the abdominal muscles as much as possible. We carry out 2-3 approaches, 20 times for each leg.

Exercises for the abs

Exercise 1. We put our back on the fitball, while the legs remain on the floor at an angle of 90 °. Hands behind head. We begin twisting, while reaching with the left elbow to the right knee and vice versa. We perform 3 sets of 30 times.

Exercise 2. We lie down on the floor, put our legs on the fitball, bend our knees at an angle of 90 °. We perform twisting in this position, without losing the ball. The exercise is performed 2-3 sets of 20 times.

Exercises for the buttocks

Exercise 1. We lie on our back, legs bent at the knees, put on a fitball. We begin to lift the pelvis, squeezing the muscles of the buttocks at the highest point of the lift.

Exercise 2. Starting position: we lie with our stomach on the fitball, lower our arms and legs down. We begin to slowly raise and lower our straightened legs. Do you feel how the muscles of the buttocks are tense? Are your legs shaking? This is good, it means that you are actively fighting your extra pounds. 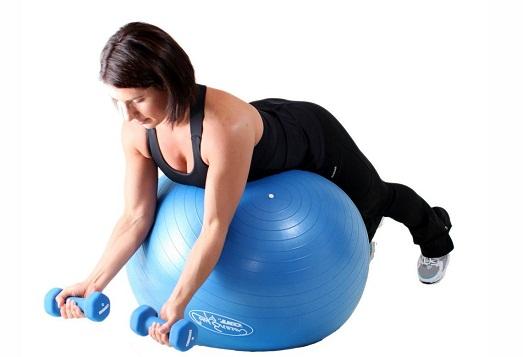 There are a lot of exercises for losing weight using fitball. A combination of these exercises with constant movement will be most effective. For example, when sitting on a fitball, perform a series of bounces, from slightly raising the pelvis above the ball to fully lifting.

It will be effective to perform such a series of exercises for a couple of minutes, without stopping, you will feel how quickly the body begins to warm up.

Reviews of girls and women practicing fitballs for weight loss indicate that the technique is really effective. Such unusual activities allow not only to diversify the usual set of exercises, but also to bring a lot of positive emotions into an ordinary day.

Now there are many modifications of fitballs – with horns for holding, with pimples. It can be noted that for women in whom getting rid of cellulite is in the first place, the decision to purchase an unusual fitball will be the most correct.

Balls with such a surface can be more painful, but it will soon live up to its expectations.