Chocolate is everyone’s favorite sweetness. There is probably no person in the world who would not like the taste and aroma of a delicacy. Sweets are made from it, it is added to all kinds of desserts. Many delicious sweets can be made at home as well. For instance, chocolate fondant recipe which almost everyone knows – will allow you to make a holiday for the whole family. Here are some interesting facts that will surely motivate the reader to go shopping for a chocolate bar. 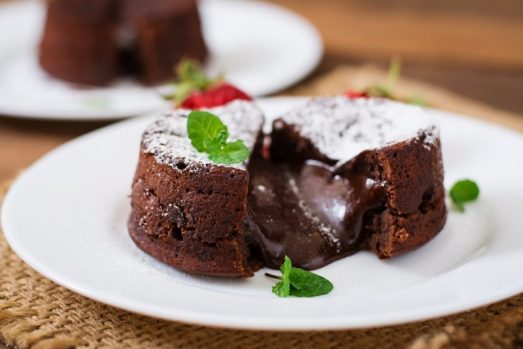 It is a natural pain reliever

Even small amounts of sweetness can help produce endorphins. These hormones not only improve mood, but also reduce the intensity of pain.

Melting chocolate wedges in your mouth make you feel good

British scientists measured the heart rate and brain function of 20 kissing couples. Then, for comparison, the same measurements were taken while enjoying the chocolate sweetness. Interestingly, melting chocolate elicited a more violent reaction in the brain and heart than a kiss.

According to German scientists, the flavonoids contained in cocoa beans are capable of absorbing ultraviolet radiation and preventing aging. The flow of blood to the face as a result of positive emotions after a bar of chocolate rejuvenates the skin, smoothes wrinkles. This can visually achieve a rejuvenating effect.

The invigorating effect is due to the presence of caffeine and theobromine alkaloids in it. Moreover, the darker this product, the more caffeine it contains. Unlike coffee and energy drinks, the product does not cause an increase in blood pressure.

Every year on July 11, the sweet tooth celebrates World Chocolate Day – World Chocolate Day. This unusual holiday was first thought up by the French in 1995. There is an assumption that the Aztecs learned to make the first chocolate.

The smell of cocoa products is relaxing

Recent studies by British scientists have shown that the chocolate smell excites the so-called theta waves in the brain. They are responsible for relaxation. The relaxing effect of sweetness lasts longer than sedatives.

A study by American scientists has shown that the consumption of cocoa products increases blood flow to the brain. And this helps to improve his work and increase cognitive abilities.

The harm of chocolate to teeth is a myth

Even 20 years ago, Japanese scientists proved that cocoa products do not harm the teeth, unlike other sweets. This is due to the antibacterial properties of flavonoids.

For the Mayan tribes, cocoa beans were the currency

In Mayan times, the value of any commodity was expressed in the quantity of cocoa beans. It is curious, but in those days there were “counterfeiters”. They made “beans” from red clay.

In low temperatures, chocolate can be stored forever

At the South Pole, a candy bar was discovered that had lain in the snow for 60 years. Despite this, it could be eaten.

The results of clinical studies show that after a piece of chocolate, the ability to see low-contrast objects improves. This property is useful for drivers.

Cocoa flavonoids reduce the risk of diabetes by increasing the sensitivity of cells to insulin.

Danish scientists have investigated that dark chocolate promotes a feeling of fullness and reduces the consumption of fatty, sweet and salty foods. It helps you lose weight.

To experience all these effects, it is recommended to consume only dark chocolate. It must contain at least 70% cocoa products.